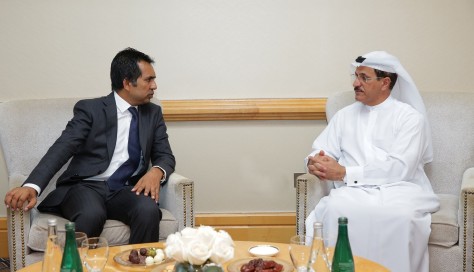 H.E. Engr. Sultan bin Saeed Al Mansoori, UAE Minister of Economy, has commended the growing trade relations between the UAE and the Republic of Maldives. The total volume of non-oil foreign trade between the two countries has progressively increased over the past five years, increasing by 12 percent from AED 422 million in 2015 to AED 475 million in 2016 (USD 129.2 million).

This came during H.E. Engr. Al Mansoori’s reception of a Maldivian delegation headed by H.E. Mohammed Saeed, Minister of Economic Development of the Republic of Maldives, in the presence of H.E. Juma Mohammed Al Kait, Assistant Undersecretary for the UAE Ministry of Economy’s Foreign Trade Affairs, and Hind Al Youha, Director of the Ministry’s Investment Department.

The meeting discussed possibilities for cooperation between the two countries in several sectors of common interest that are in line with their economic agendas. The most prominent were trade exchange; enhancing cooperation in aviation and tourism; and strengthening investments in tourism facilities and infrastructure as well as real-estate, renewable energy, innovation, and small and medium enterprises (SMEs).

H.E. Engr. Al Mansoori pointed out the significance of reinforcing cooperation in foreign trade, mainly in export and re-export activities, noting the need for continuous coordination and cooperation among concerned government and private sector entities from both countries in the coming period. H.E. also emphasized the importance of the UAE- Maldives Business Forum which will be held on December 18, 2017, in the UAE, which he said will showcase the numerous trade and investment opportunities in the Republic of Maldives.

The Minister further underscored how diversified investment cooperation between the UAE and the Maldives will open broad horizons for establishing development projects for the benefit of both sides especially in the sectors of tourism, hospitality, renewable energy, innovation, and SMEs which he said are considered important accelerators for economic growth. H.E. emphasized the UAE’s keenness to support ongoing development efforts in the Maldives and its readiness to share its vast knowledge and experience in various areas of economic development.

For his part, H.E. Saeed said that the Republic of Maldives seeks to strengthen economic cooperation with the UAE, its largest trading partner in the region. He pointed out that tourism in the Maldives is considered an attractive and competitive sector at both the regional and global levels. He said that the sector is constantly expanding and ripe for significant investment and development with the potential to significantly benefit the UAE’s business and investment sectors which have leading experiences in this vital field.

H.E. added that the Maldives is focusing on enhancing the sectors of aviation, renewable energy, and real estate; developing new laws; and further developing free zones to encourage and attract more investments in various fields. He pointed out that these areas are also priorities under the UAE’s development policies, providing a strong and fertile basis for strengthening partnership and cooperation between the two countries.

It's all about the property market

A very talented individual and a go getter,wants to innovate and fascinated to find what's new and cool right now...social media enthusiast and loves to write too.